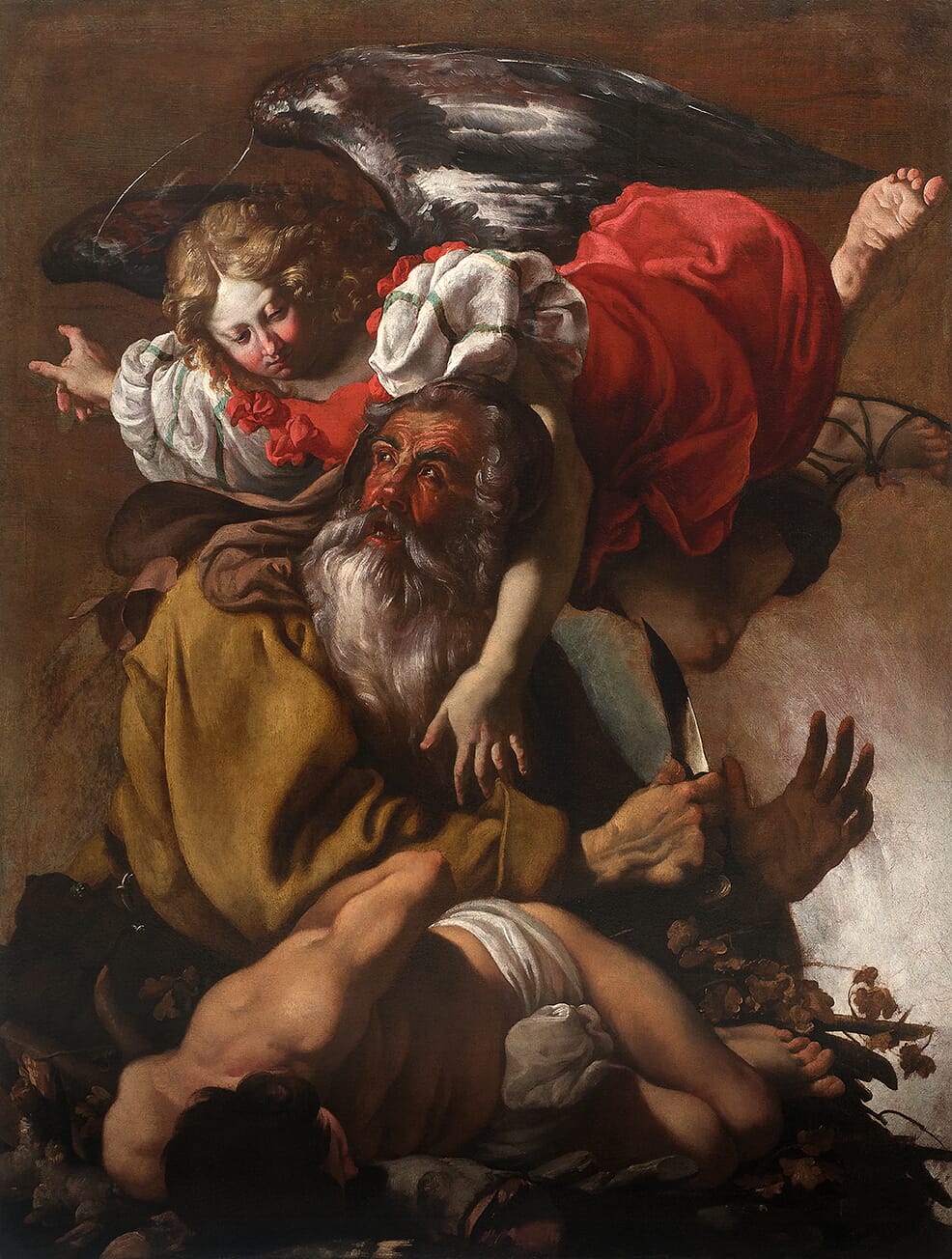 According to Lia Bellingeri, who dedicated a small monograph to the artist, Luigi Miradori, called il Genovesino, was not only one of the most important artistic personalities of the seventeenth century in Cremona, but also one of the most interesting protagonists of the Lombard Seicento.[1]

From the description of Giambattista Biffi, we know that Luigi Miradori "was a jovial man, fine and quick-witted, an able interlocutor, [who] with each encounter revealed his ingenuity and on many occasions demonstrated his considerable courage at the time when one unfairly resorted to one's sword. He played the mandolin excessively well... He went around the city wearing his red beret, his moustache in the Spanish fashion and a small beard covering his chin."[2] Biffi and Desiderio Arisi are convinced to be able to identify the artist's self portrait in the man with the beret in the large Multiplication of the Loaves (Cremona, Palazzo Comunale) and in the Martyrdom of St. John of Damascus (location unknown).[3]

According to Giovanni Battista Zaist and Giuseppe Grasselli,[4] Miradori, who was born in Genoa, is likely to have been trained in this city before becoming active in Milan, Piacenza and especially Cremona, where he settled around 1635-1637. He remained associated primarily to the latter, which granted him, according to Zaist, the "cittadinanza". A significant number of his paintings have been mentioned in the collection inventories in Cremona, although it is impossible to trace most of them. A few signed and dated paintings provide valuable chronological indications, such as The Birth of the Virgin and The Beheading of Saint Paul, both at the Museo Civico of Cremona, dating 1642. Some archival documents also deliver information on the commissions, for example, an Adoration of the Magi, now lost, was commissioned in 1639 by abbé Melchiorre Aimi and a Saint Eusebius was paid for in 1647 by conte Nicolò Ponzone. However, the dating of the artist's works must often be made on stylistic bases and be consistent with different influences that can be detected in each work: the Genoese influence of Strozzi and Ferrari that persisted in his work; the influence of Caravaggio, introduced in Genoa by Gentileschi and Vouet; the Tuscan influence; and finally, that of Pietro Ricchi who, during his short stay in Cremona in 1647, helped to accelerate the renewal of pictorial formulas that were in use there and that had been inherited from the art of Campi and Giovanni BattistaTrotti, called il Malosso.

Miradori treated the subject of the Sacrifice of Isaac at least twice, maybe thrice. There is, in addition to the present painting, a version in the Figge Museum, Davenport, USA (Fig. 1), and another one that went on sale at the Dorotheum, Vienna, Austria (Fig. 2), as "attributed to Miradori." [5] These three versions with the same subject share the identical atmosphere and present some interesting similarities. The colours of the costumes and complexions are close: the yellow tunic of Abraham, the puffed white shirt of the angel worn under the red dress, and Isaac's dark brown skin in the present painting are almost identical in the works in the Figge Museum. In the painting from the Dorotheum, the theme of sleeping Isaac is taken from the present painting and simply reversed, while Abraham's physiognomy rather seems to be borrowed from that of the Figge Museum. This manner of working is typical of Miradori who in different paintings reuses different elements and physiognomies, sometimes borrowing them from the engravings, for example by Goltzius or Callot.

How can we date the present work, on the one hand, within the totality of the works by Miradori, and on the other, in relation to the other two versions? It undeniably bears traces of the artist's visit to Genoa. The influence of Bernardo Strozzi can be detected in a number of elements: the brown palette, the slightly rotund face of the angel, the manner in which the silhouettes stand out against a dark background, crumpled draperies, and distinct rich strokes. The idea of ​​the angel floating above Abraham, distantly derives from Caravaggio's angel descending to whisper his inspiration into Saint Matthew's ear in the work preserved in the church of San Luigi dei Francesi, Rome. The influence of Pietro Ricchi does not seem very important in the present work, unlike in the one from the Dorotheum. There, the long face and almond-shaped eyes of the angel, the aquiline profile and long flowing beard of Abraham, as well as the grey evanescent palette, all recall this itinerant artist. Ricchi was trained in Florence and finished his life in Udine, having worked in Bologna, Rome, Lyon, in several cities of Lombardy, Venice, Padua, as well as Cremona, where he arrived in 1647. Therefore, our painting may have been executed before this date. Yet it is impossible to be certain, given the current state of information on the artist.

Miradori seems to have retained from the lesson of Caravaggism the will to represent men above all else: insisting on the carnal, physical side of the scene, he chose realistic physiognomies without any idealisation, with which viewers could empathise.  The craggy, bronzed, and rough face of the patriarch of the tribes of Israel, the curled up, dark, and stocky body of Isaac, the rotund feet of the angel with irregular toes, all evoke a tangible reality.

This forced realism does not deprive the work of all poetry or a sense of mystery. Miradori stripped down the episode of almost all its accessories – the bush, fire, the cloud of smoke, the ram – to keep solely the protagonists, placed on a dark background. The angel wrapped his left arm around Abraham's neck to stop the hand raised for the sacrifice, yet their eyes do not meet: Abraham's revelation is an inner reality and it is for the attention of the viewer, rather than the patriarch, that the angel extended his right hand pointing back at the ram, intended to substitute for Isaac although not represented in the canvas.

Miradori seems to have manipulated the same elements from one version to another, which relates them closely. The present painting, however, has a particular visual strength. The attitude of Isaac, entirely at the mercy of fate; the face of Abraham, marked by stupor and shock; the suspended flight of the angel and the texture of his grey wing which is stretched above the scene like a stormy sky; and finally, the strangeness of the postures – all this with great force conveys the sense of the revelation which constitutes one of the major episodes of the Old Testament.

[5] This work went on sale at Dorotheum on 18 April 22012, lot 719. It is not reproduced in Lia Bellingeri's book (op. cit.) and we are unaware whether it has been accepted in the corpus of artist's works. It is nonetheless very closely related to the two accepted versions of the Sacrifice of Isaac and as such can be used as a point of comparison.